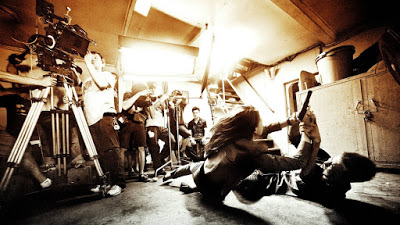 1. You have a choice of being “in the business” or of making movies. If you’d rather do business, don’t hesitate. You’ll get richer, but you won’t have as much fun!
2. If you have nothing to say, don’t feel obliged to pretend you do.
3. If you do have something to say, you’d better stick to it. (But then don’t give too many interviews.)
4. Respect your actors. Their job is 10 times more dangerous than yours.
5. Don’t look at the monitor. Watch the faces in front of your camera! Stand right next to it! You’ll see infinitely more. You can still check your monitor after the take.
6. Your continuity girl is always right about screen directions, jumping the axis and that sort of stuff. Don’t fight her. Bring her flowers.
7. Always remember: Continuity is overrated!
8. Coverage is overrated, too!
9. If you want to shoot day for night, make sure the sun is shining.
10. Before you say “cut,” wait five more seconds.
11. Rain only shows on the screen when you backlight it.
12. Don’t shoot a western if you hate horses. (But it’s okay to not be fond of cows.)
13. Think twice before you write a scene with babies or infants.
14. Never expect dogs, cats, birds or any other animals to do what you’d like them to do. Keep your shots loose.
15. Mistakes never get fixed in post!
16. Final cut is overrated. Only fools keep insisting on always having the final word. The wise swallow their pride in order to get to the best possible cut.
17. Other people have great ideas, too.
18. The more money you have the more you can do with it, sure. But the less you can say with it.
19. Never fall in love with your temp music.
20. Never fall in love with your leading lady!
21. If you love soccer, don’t shoot your film during the World Championship. (Same goes for baseball and the World Series, etc.)
22. Don’t quote other movies unless you have to. (But why would you have to?)
23. Let other people cut your trailer!
24. It’s always good to make up for a lack of (financial) means with an increase in imagination.
25. Having a tight schedule can be difficult. But having too much time is worse.
26. Alright, so you’re shooting with a storyboard. Make sure you’re willing to override it at any given moment.
27. Less make-up is better.
28. Fewer words are always better!
29. Too much sugary stuff on the craft table (or is it Kraft?) can have a disastrous effect on your crew’s morale.
30. Film can reveal the invisible, but you must be willing to let it show.
31. The more you know about moviemaking, the tougher it gets to leave that knowledge behind. As soon as you do things “because you know how to do them,” you’re fucked.
32. Don’t tell a story that you think somebody else could tell better.
33. A “beautiful image” can very well be the worst thing that can happen to a scene.
34. If you have one actor who gets better with every take, and another who loses it after a while, make sure they can meet in the middle. Or consider recasting. (And you know whose close-ups you have to shoot first!)
35. If you shoot in a dark alley at night, don’t let your DP impose a bright blue contre-jour spotlight on you, even in the far distance. It always looks corny.
36. Some actors should never see rushes. Others should be forced to watch them.
37. Be ready to get rid of your favorite shot during editing.
38. Why would you sit in your trailer while your crew is working?
39. Don’t let them lay tracks before you’ve actually looked through your viewfinder.
40. You need a good title from the beginning. Don’t shoot the film with a working title you hate!
41. In general, it’s better not to employ couples. (But of course, there are exceptions!)
42. Don’t adapt novels.
43. If your dolly grip is grumpy or your electricians hate the shot it will all show on the film. (Also, if you’re constipated…)
44. Keep your rough cut speech, your cast and crew screening speech and your Oscar speech short.
45. Some actors actually improve their dialogue in ADR.
46. Some actors should never be forced to loop a single line. (Even Orson Welles wasn’t good at that.)
47. There are 10,000 other rules like these 50.
48. If there are golden rules, there might be platinum ones, too.
49. There are no rules.
50. None of the above is necessarily correct.